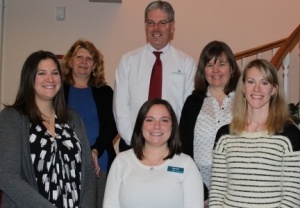 Oak Ridge, NJ – January 22, 2015 –– Lakeland Bank recently honored five employees with the Employee of the Quarter Award. Kim Coleman, Mary Franchini, Mary Kellenberger, Amy Lane and Sarah LeoGrande, were presented with the award based on nominations submitted by their colleagues.

“Congratulations to all of the awardees for their exceptional service,” said Thomas J. Shara, president and CEO of Lakeland Bank. “We appreciate the commitment and dedication they demonstrate to our customers, our bank and the communities we serve.”

Kim Coleman, Senior BSA/Fraud Analyst, BSA Department, Milton -- Coleman began her career with Lakeland Bank in 2006 as a BSA Analyst and was promoted to her current position in 2014. She is a resident of Wantage.

Mary Franchini, Office Assistant, Government Banking/Business Services, Montville -- Franchini joined the Bank in 2005 as a part-time Branch Administrative Assistant in the Montville office. In May 2010, she transitioned to her current position and became a full-time employee in 2011. Franchini resides in Lake Hiawatha.

Mary Kellenberger, Assistant Image Supervisor Transit & Imaging Department, Milton -- Kellenberger began her career with the Bank in 2006 in the Transit and Imaging department. She is a resident of Wantage.

Amy Lane, Administrative Assistant, Commercial Lending Team, Montville -- Lane joined the Bank in 2004 as a Teller in the Sparta Office advancing to Teller Manager of the Caldwell Office. She was promoted to Customer Service Representative and later to Assistant Branch Manager of the West Caldwell Office prior to her current position. She resides in Hillsborough.

Sarah LeoGrande, Teller Manager, Hampton Branch -- LeoGrande joined the Bank in May 2014 after working for Fulton Bank for four years. She quickly demonstrated her leadership skills and an ability to successfully manage the Bank’s sales process. She resides in Wantage.

Photo caption: Lakeland Bank President & CEO Tom Shara (back row) stands with colleagues (l to r) Mary Kellenberger of Wantage and Mary Franchini of Lake Hiawatha; and in front (l to r) Amy Lane of Hillsborough, Sarah LeoGrande and Kim Coleman both of Wantage who were all presented an Employee of the Quarter Award.