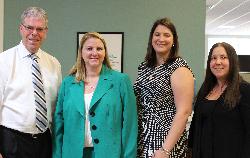 Oak Ridge, NJ, July 8, 2014 – Lakeland Bank recently recognized three colleagues for their 10 years of service to the company at a ceremony held at the Bank’s corporate office. Beth Johns, Amy Lane and Amy Ottaino all reached this significant milestone.

“It is a pleasure to reward our colleagues for their 10 years of service to the bank. Their long-term commitment to Lakeland Bank and our customers is an accomplishment that deserves recognition,” said Thomas J. Shara, president and CEO of Lakeland Bank.

Beth Johns – Vice President, Commercial Loans, Montville Johns joined the Bank in 2004 as a vice president, commercial loans for the Montville Office. She has been in banking since 1999 having held positions with Farmers Bank of Hanover as branch manager, with Fulton Bank as vice president, relationship manager and Interchange Bank as vice president, small business lending. Johns received her Bachelor’s degree from Shippensburg University and her MBA from York College. She is a member of the Executive Women’s Golf Association and the Commercial Real Estate Women of N.J. Johns resides in Lake Hopatcong.

Amy Lane – Administrative Assistant, Commercial Loans, Montville Lane joined the Bank in 2004 as a teller in the Sparta Downtown Office advancing to teller manager of the Caldwell Office. She was promoted to customer service representative and later to assistant branch manager of the West Caldwell Office until accepting her current position. Lane has an associate’s degree in Science/Mathematics from Sussex County Community College and continues coursework toward an Advanced Financial Services Diploma. A member of the Phi Theta Kappa Honor Society, she volunteers for the American Lung Association and has supported Paterson Habitat for Humanity and Coastal Habitat for Humanity. Lane resides in Hillsborough.