“Lakeland Bank thanks our colleagues for their commitment to the Bank, and congratulates them for reaching their service anniversary milestone,” said Thomas J. Shara, President and CEO.

Cecilia Bastady,Assistant Vice President, Paralegal II.Bastady joined the Bank in February 2005 as a Call Center Clerk in Loan Operations. She transferred in 2007 to Commercial Loans as a Commercial Loan Assistant and in 2010 to the Legal Department as a Paralegal. She was promoted to Assistant Treasurer, Paralegal in September 2011. Bastady has an associate’s degree from Berkeley College and Paralegal Certification from the National Academy of Paralegal Studies. She is a resident of Jefferson.

Joan B. Kozlik, Vice President, Area Manager, Summit and Madison Offices. Kozlik joined the Bank in 2012 with the Somerset Hills Bank merger, and was named to her current position. She had been Vice President, Business Development Officer and Branch Manager of the Summit office since 2005. Her career began at Summit Bank where she advanced from Teller to Branch Manager. She attended Fairleigh Dickerson University, is an American Institute of Banking graduate, was a member of Summit Kiwanis Club and treasurer of the budget committee for the Summit School. Kozlik resides in Florham Park.

Bianca Schafer, Image Operator, Image Department. Schafer joined the Bank in 2005 as an Image Operator. She graduated from Passaic County College with an associate’s degree in data processing and has taken the Principles of Banking course through the American Institute of Banking. Schafer participates in the Bank’s blood drives and volunteers on the Bank’s team to support Habitat for Humanity. Schafer is a resident of Vernon.

Marlena Taglieri, Assistant Vice President, BSA-Fraud Manager, BSA/AML. Taglieri joined the Bank in 2005 as a Credit Analyst Trainee, transitioning in 2006 to the BSA-AML department as a BSA-AML Specialist. She was promoted to BSA-AML Manager in 2009, to Assistant Treasurer in 2010 and to Assistant Vice President in 2011. Taglieri has an associate’s degree in science with an accounting major from Bergen Community College and resides in Stony Point, N.Y.

Frank Walka, Assistant Vice President, Business Process Analyst/Business Intelligence and eBanking. Walka joined the Bank in 2005 as a Teller at the Morristown and Boonton Offices and was promoted in 2009 to Customer Service Representative at the Montville Office. He transitioned to Branch Operations Specialist, Branch Administration in 2011, was promoted to Assistant Treasurer, RDC Officer & Branch Operations Specialist in 2012 and promoted to Assistant Vice President in 2013. In 2014, he transitioned to his current position. A graduate of County College of Morris and Montclair State University, Walka resides in Boonton.

Mallory Wetton, Image Operator, Image Department. Wetton joined the Bank in 2005 as a Transit Operator working after school and then transitioned to full time after graduation. In 2012, she began assisting Computer Operations and working at the Help Desk. A Jefferson Township High School graduate, Wetton has been a Habitat for Humanity volunteer since 2011 and was a volunteer elf for the VRA in 2012 on the Toys for Tots Train and in 2014 on the Santa Train. She also volunteers for the URHS, an organization that restores vintage trains and rail cars. Wetton resides in Newton. 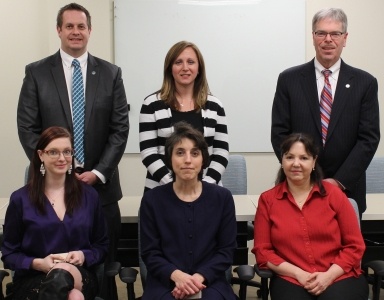 Caption: Lakeland Bank President & CEO Tom Shara (back row right) stands with colleagues Marlena Taglieri and Frank Walka and seated left to right, Mallory Wetton, Suzanne Shack and Cecilia Bastady who were all recognized for their 10 years of service.